Does Hair Loss Hurt Your Career?

Does Hair Loss Hurt Your Career? 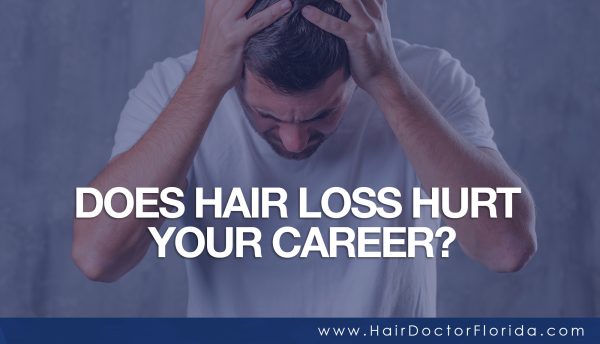 Like it or not, appearances count in our society. While we may believe that people should be judged by their merits, abilities and character, such isn’t always the case. In particular, men who are in the job market – or interested in career advancement – and experiencing hair loss could be wondering if their male pattern baldness (androgenic alopecia) is harming their chances. While there is no single answer that applies to all, this is a legitimate question that’s being asked more frequently in today’s highly competitive environment.

Not very long ago, only men in the entertainment industry had to be concerned about hair loss affecting their career. Our blog post – “Celebrities and Hair Loss – When Image Really Counts” – discussed two patients of Dr. Marco Barusco: Jimmy “The Mouth of the South” Hart and Brazilian actor Humberto Martins. Hart’s career path led from musician to professional wrestling superstardom. Still involved in the wrestling and entertainment worlds, Hart believed that his gradual hair loss was eroding his youthful image – and in turn, his ability to connect with his fans. In the case of Martins, the dashing leading man noticed the roles he was being offered were for older characters.

Now, however, men in professional-level jobs are anxious about hair loss. This can be attributed to the often unspoken concerns regarding age discrimination in the workplace. According to Hiscock’s 2019 Ageism in the Workplace Study, more men than women feel that their advancing age has adversely impacted their careers – with 43% of men surveyed believing their age has prevented them from finding a new job.

The job search website Ladders reports a survey conducted by Dove Men+Care which found that of the 2,000 men who participated, the majority tied their work identities to their hair. The article reports the following results and observations.

“In the hair census, 8 in 10 men said that their hair made them look professional, the look of it was important, and that their hair helps them feel confident. Perhaps the majority of these men are preoccupied with their hair because they recognize what science has found: that societies judge men on how much hair they have on their heads.”

“A study in JAMA Facial Plastic Surgery found that a few more hair follicles can make all the difference between people seeing you as a success or a lost cause. The Johns Hopkins University researchers recruited participants to compare photos of men before and after they got a hair transplant. Although they were looking at the same men, participants rated men after they got their hair transplants as more attractive, approachable, and successful.”

While Americans are known for being focused on self-image, the anxiety that balding men face regarding discrimination while job hunting is international. As Joe O’Shea reports in the Irish Independent, the reasons why men feel compelled to take action on hair loss have changed in recent years. Where once the main motivation may have been in conforming to an ideal of attractiveness, professionals in the hair restoration field say their clients now talk about wanting to look young and vital in an increasingly competitive job market.

“We do have guys that come to us that feel that going thin on top is going to count against them in their careers,” says Jessica Kidd of JK Hair Replacement, a Dublin practice specializing in non-surgical hair replacement treatments and hair systems. “They worry that people will make negative judgements in a job interview, or how they are seen in the company they work for.”

According to Thomas Cash, emeritus professor of psychology and author of The Body Image Workbook, societal bias against men experiencing hair loss is real. In a study that looked at bias, Cash showed people photographs of bald or balding men – as well as men with a full head of hair – asking them to rate the men for qualities such as self-assertiveness, social attractiveness, intelligence, life-success, personal likability, physical attractiveness and perceived age. He found that “… the bald or balding models were perceived more negatively on every dimension except intelligence.”

As for the matter of age perception, Cash’s study found that when people were shown photographs of bald men and asked to estimate their age, they added an average of three years and nine months to the men’s actual age. Men with a full head of hair had an average of two years and five months taken off.

Be proactive, but be smart

Considering the aging effect that hair loss has on one’s appearance, an increasing number of men are more proactive in seeking treatment during the early stages, which typically begins after age 20, but can occur sooner – even during adolescence. Unlike previous generations, today’s young men are less willing to accept hair loss as inevitable.

This has perhaps led to the rise of online subscription hair restoration companies, which prescribe and sell prescription medications to treat hair loss. While patients may like the convenience such services offer, a brief online consultation with a doctor chosen by the company or simply diagnosing their own type of hair loss to receive home delivery of medication carries risks. It is a little-known fact that there is no single federal or state agency in charge of overseeing online prescription drug services.

As reported by Natasha Singer and Katie Thomas in their article for The New York Times – Drug Sites Upend Doctor-Patient Relations: ‘It’s Restaurant-Menu Medicine’ – “The sites invert the usual practice of medicine by turning the act of prescribing drugs into a service. Instead of doctors making diagnoses and then suggesting treatments, patients request drugs and physicians serve largely as gatekeepers.”

Online subscription companies treat healthcare like any commodity that can be ordered and shipped. For treatment in any branch of medicine to truly be successful, a doctor-patient relationship based on trust, accountability, mutual respect and transparency is essential. The bottom line: make sure you’re not trading your health for convenience in stopping the advancement of hair loss.

Surgical hair replacement procedures for those who take the next step

Just as in other fields of medical science, advancements are constantly being made in hair transplantation surgical procedures. Tempus Hair Restoration offers advanced procedures that provide options to achieve the most aesthetically pleasing, natural-appearing results. Our surgical treatments include the following.

Follicular Unit Extraction (FUE) – Typically done as a shaved procedure (where the donor area is shaven), Dr. Barusco created an improved technique known as the “No-Shave FUE.” This technique allows patients to have the benefits of an FUE procedure without having the downtime of waiting for the hairs of the donor site to grow in. Advantages include complete concealment of harvested donor sites immediately, and a quicker return to normal activities, as no suture removal is required.

Follicular Unit Transplantation (FUT) – This is commonly known as the “strip” method of hair transplantation. In this procedure, hair is removed from the donor area of the scalp by removing a strip of skin and hair before the area is then stitched up. Advances in the closure methods and the healing of the donor incision results in a small, thin linear scar that is easily concealed without having to grow the hair very long.

Word of warning: sensationalist marketing material from doctors wanting to promote the FUE method usually depicts a large linear scar on the back of an individual’s head next to another picture of an individual where the scar is not visible. These types of advertisements have been produced to scare patients away from FUT surgery so they only consider the FUE procedure. However, the FUE technique does not work for every patient. For a variety of factors, you may be a better candidate for the strip surgery.

Combined FUE and FUT procedure – This technique covers large areas of baldness in a single surgery. Patients with advanced hair loss are typically required to undergo multiple hair transplant procedures to obtain coverage of their entire bald scalp – having to wait one year or more between procedures.

Tempus Hair Restoration offers a safe, tested hair transplant surgery solution for patients with advanced hair loss: a combined procedure in which – by using both FUE and FUT techniques – we are able to move a large amount of hairs in one procedure, covering large bald areas at one time. This allows patients to achieve their ultimate goal sooner, with one procedure versus many. But be aware that this is an advanced procedure and should be performed only by doctors and teams with a great amount of experience. For this reason, selecting the right doctor and team is even more important!

As mentioned earlier, two of Dr. Barusco’s celebrity patients – Jimmy Hart and Humberto Martins – achieved the career revitalization they’d hoped for with thick, full hair. Hart began getting compliments on his ageless appearance – a tale he relates in his inimitable style in his testimonial video for Dr. Barusco. And Martins was again winning younger roles.

Will a hair transplant make it easier for you to land your next job or get a promotion? Some psychologists say that the increased self-confidence helps create an aura of success that can translate into convincing a potential employer you’re the perfect fit – or a current employer that you’re the one to move up the ladder. And if you believe employers expect to see a youthful, vital candidate and that’s what you are, you’ll have a valuable competitive edge!

You are invited to learn more about the innovative surgical and non-surgical hair restoration procedures that Dr. Barusco offers at Tempus Hair Restoration – as well as schedule a free consultation to learn your options. If you are unable to visit one of Tempus’ 16 Florida locations in person, you may consult with Dr. Barusco via teleconference. For your convenience, consultations are offered in English, Spanish and Portuguese.